This was a great success, with 50 people present and it opened with the launch, by the Mayor of Dorchester, Councillor Susie Hosford, of the new website: http://whoistheretohelp.org/ 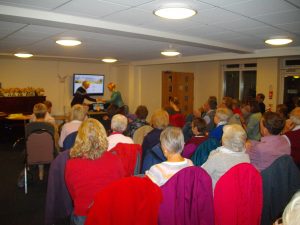 There were two speakers – Ellie Maguire of Dorset Community Foundation, and Robert Potter of Dorchester Relief in Need.

Ellie Maguire explained that there were 46 Community Foundations across the country and their funding is gathered from unused sources such as unclaimed endowments held by solicitors, unused/outdated parish charities, as well as being distribution agents for national fund-raisers such as Comic Relief.

Local groups (which need not be registered charities) can apply, but not large or national charities, and a few grant streams are open to individuals. She gave examples of the current funding streams:

Ellie also gave us Top Tips for those applying for grants from any agency. 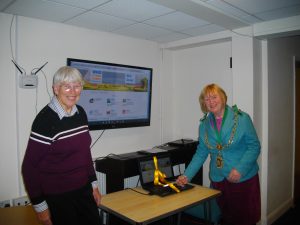 Robert Potter explained that there used to be 5 separate parish charities set up in the late 19th and early 20thcenturies, mostly funds left by local landowners for poor people living within Dorchester. These were amalgamated finally in 1982 and apply to those living within the parish boundary, which is more or less the DT1 area.

The capital money is invested and the income from this is for local people in need. Applications are not taken direct from individuals but from social workers, health visitors, CAB and similar agencies. Grants are usually in the region of £200 and are managed quite tightly, with specific information being necessary, including a means of paying them to an agency not to the client.

Useful discussion and sharing of information followed, with several local organisations represented. The meeting finished, as promised, by 8.30pm.